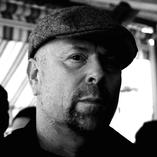 Bio: Guli Silberstein is a London-based artist creating digital works since 2001, following his graduation from the MA in Media Studies program in The New School University, New York, USA. His artwork is characterised by processing personal recordings, found footage, and mixes of both, by digital technologies such as ‘glitch’, and lately focusing on the exciting possibilities inherent in Artificial Intelligence.

- Field of Infinity got the main award at Festival international Signes de Nuit, the Italian version in Urbino Italy.

Jury: "For the rhythm achieved by intertwining sound and image which are skilfully employed to express those "other" images abstracted from their original narrative contexts, to become anew concrete in the perception of the viewer.".

A Selection of Exhibitions & Festivals:

- Art Fair Madrid, a parallel fair around ARCO from 26th February to 1st of March 2020

- Bronx Art Space, New York, in the exhibition by Synthetic Zero: The Virtual is (Always) Already Real, curated by Mitsu Hadeishi 2019 (2013 exhibition too)

- Field of Infinity was on show at the SSA | VAS OPEN 2020, in a presentation curated by Cutlog artists moving image, taking place at the Royal Scottish Academy in Edinburgh, 22 December until 30 January

- The Festival of (In)appropriation, the Spielberg Theatre at the Egyptian, LA, 19.2
- ‘Visions in the Nunnery’, curated by Tessa Garland and Cinzia Cremona, the Nunnery Gallery, Bow Arts, London 2016 (and 2008)

- A detailed interview in the printed-only Found Footage Magazine, conducted by José Sarmiento Hinojosa. Available for purchase online at www.foundfootagemagazine.com and in selected book shops. Published on March 2020

- A guest artist lecture, by invitation of the City of Poznan and Collegium Da Vinci university, Poznan, Poland  Dec 12, 2019

- Review: The Jerusalem Post, 'A Fine Line', about the work 'Target: Over & Out'. 18.2.19
- A talk and panel at 'Ecstatic Truth: Lessons of Darkness and Light' conference, RCA 27.5.17
- Jury for experimental film competitions at the 20th Jihlava Film Festival, October 2016, Czech Republic
- Found Footage Magazine #2, April 2016 – film review
- The Scotsman, Scotland's national newspaper. film review, April 2016
- Else Journal, Review in 'Digitality and Visuality of Nostaligia, Trans-ideology' by Ming Turner, 2015
- Winner of an open call for a guest artist-curator exhibition for Salisbury Arts Centre, UK. Curating the
exhibition 'Freedom of Others', and participating. October 2012